Presbytery Co-Chair, Judy McKinlay and Presbytery Minister – Congregation Futures, Rev Andrew Smith are our Presbytery elected members of the 16th National Assembly of the Uniting Church in Australia. Here they share some of their highlights from the recent two-day online component of the Assembly gathering. At the conclusion of the second day, Assembly was adjourned to hopefully reconvene face to face on the Sunshine Coast in 2022.

A weekend on Zoom seemed a somewhat daunting prospect, but the mysterious synergy of the church gathered in the presence of its Triune Lord, the gifts of technology, and a wonderful cast of organisers countered all those human constructs of time, distance, and culture, and the impact of a pandemic that works to divide us. The new Assembly theme selected by our new President, Rev. Sharon Hollis, reminds us we are “Dwelling in love”, which knows no boundaries or limits and holds all Creation close. As we opened in worship, I felt the great privilege we had been given by our Presbytery to be part of this time - of sharing with so many others across our vast country “as we journey together in faithfulness to Christ.”

One of the highlights for me of the 2021 online component of 16th National Assembly was the Bible study input provided by leaders from Nungalinya College. Nungalinya is an ecumenical training college located in Darwin equipping First Peoples for leadership in churches and communities. It is supported by the Anglican, Uniting and Catholic churches of the Northern Territory.

With support and co-ordination from Rev Michelle Cook, eight leaders from Nungalinya shared on the theme “Dwelling in love” informed by group bible studies on the context of 1 Corinthians 13, St Paul’s reflections on the sharing of the Lord’s Supper and John 15.

The study opened with an introduction to the Yolŋu worldview from Rev Deacon Maratja Dhamarrandji, a leader of the Northern Regional Council of the Uniting Aboriginal and Islander Christian Congress (UAICC) and former chair of the Nungalinya Board.

“I’m a Yolŋu man and a Christian man. I’m not an individual that can be introduced alone. No Yolŋu person is ever alone. A Yolŋu is always in relationship to someone and something else,” said Maratja.

“A Yolŋu is always a ‘half’ of another ‘set’ of Yolŋu. This understanding may be contrasted from the Latin American saying that it takes two to tango; in the Yolŋu worldview, it takes more than one to be Yolŋu.”

The small group time that I was part of following the Bible study was asked, “what will you carry with you from the Bible study?”. Responses of my group included our tendency to rush past difference to get to what we are used to. When we do this, we miss out on relationship with someone or something else – we assert ourselves as individuals and seek to be introduced alone. The wisdom of the Yolnu worldview speaks to us here.

Another of the leaders, Troy Mardigan, showed one of his paintings, describing that it represented the water lily plant. We could see the tether from the bed of the pond rising to the surface where there was a mass of fruit. In the life cycle of the water lily, the flower had died and this fruit had floated to the surface. The artist spoke about how this fruit is gathered as bush tucker. Its seeds are ground to make the base for damper. The artist reflected on flowers dying and the fruit rising in terms of Jesus’ death and resurrection, and Jesus being the bread of life. There is enough bush tucker for everyone. 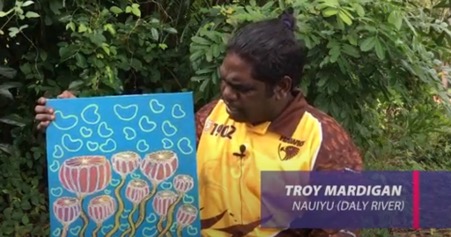 Some of how this painting has connected with me in the start of the new week is through the Gospel of John reading of Jesus feeding the 5000, and through the GRACE fresh expressions in our Presbytery. In this reading, no matter who you are in the story, there is more than enough for everyone. Whether you see yourself as the boy who offered up his lunch. Whether you are the disciples who feel the burden of catering for the needs of the people. Whether you are at the front of the crowd pressing forward or lingering at the back. There is more than enough.

I like that GRACE and other fresh expressions of church show that there is enough, particularly for people whose experience of the conventional church may have been that there was not enough for people like them. They may have been on the fringes of the crowd, among those who are lingering at the back. They may have wanted to get close to Jesus – to his words and reach out and touch, but the message they have picked up from the conventional church is that there is only enough if you change and become like us – come and join us on Sunday mornings to sit in rows and sing songs. There is enough for you if you dress like us and express yourself in ways that fit with us in our building … and the list may go on.

However, from the John reading and Troy’s interpretation of his painting, in Jesus there is enough bread of life for everyone, in the spiritual sense and also as bush tucker.

Like Andrew, I found this part of the Assembly deeply moving and meaningful, for a number of reasons additional to the wisdom spoken by the Nungalinya students and teachers. Morris Karui, from Wadeye (Port Keats) also spoke of the waterlily, and how when he was just five years old, his grandmother taught him about it. Remembering the impact of looking at the flower with her, Morris said “God’s spirit was in the flower, working on it and my heart and mind opened – maybe God wants me to love my neighbours, love people no matter the difference. Like Jesus loved everyone.” A grandmother and a flower – and the spirit of God stirring the desire to love like Jesus in a small child. With our anxiety to ‘grow the church young’ and focus on finding ways to engage youth, do we remember how often spiritual awareness starts in such ways, and value the small, unheralded actions of love so many of our older disciples practice as just as missional as those other, more overt activities we pursue?

Joanne Baker from Milingimbi spoke further of love as action, of her intent to “show love by walking with those who are broken in spirit”. For her, love is action, - “it hurts, strides, brings people together….”. To paraphrase some of her words: it’s practising that fruit of the Spirit; always keeping it in your mind and heart, how Jesus taught us, the Spirit inside us. Only love that speaks can turn everything….when I speak, his words never return, it just flows….Love is freedom. With the integrity of the Lord inside us, your love shows clear.

Another special highlight for me was to hear a number of members of families I knew in the Western desert lands I once lived on, read Bible passages. We are so conscious now of the terrible impact of colonialism and the church’s role in much that was harmful, we sometimes forget that it was genuine love of Jesus that drew so many to live alongside Aboriginal people in the harshest of conditions. The young woman from Mt Liebig who read Scripture in our Assembly held a Bible written in Luritja, available to her because an amazing Baptist couple from Canyonleigh lived in a caravan there for the forty years it took to make a translation. The young man from Hermannsburg who read Scripture in our Assembly in Aranda is a descendant of the first ordained Aboriginal Lutheran pastor, who was taught about Jesus by the early German missionaries who first learned and translated his language. We recognise now the truth that God has always been in this land and that we have much to learn from and with our Indigenous brothers and sisters in Christ. But this moment was also a reminder that God is always weaving his purposes into being, and everything done for love of him bears fruit in its time. You can view the video of input from Nungalinya College through this link: 0718_2a-Bible Reflections from Nungalinya College.mp4 - Google Drive

Another of the highlights for me was the announcement of the ballot for President Elect. Rev Charissa Suli has joyfully been declared President-elect of the Uniting Church in Australia. Charissa is the youngest and first person of colour to serve as President-elect, and the second ordained woman. 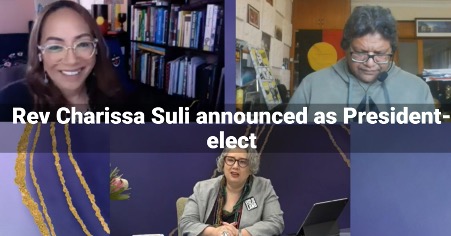 In her response to the announcement Charissa said: "This is truly an historic moment for the Church. This is ground-breaking that you call a Second Generation Tongan Australian, still in her thirties. Today we move forward because of you all."

“I am conscious of people, both known and unknown, who have prayed, sacrificed and struggled for this moment. But let us celebrate it and give thanks for what God has done and continues to do through your witness to Christ’s radical hospitality.”

“This is the Uniting Church I have come to know that has given me the space to grow and be challenged, the opportunity to try new things, to call me into mission and to exercise my discipleship and affirm my gifts as a leader, even if I looked different or did things that were different from the status quo.”

“The Uniting Church can give me all the emotions on any given day, but it is the Church that I will always love.”

I was deeply moved by Charissa’s response as she seamlessly moved between Tongan and English to express her thankfulness and hope in being declared President-elect. It was especially her words in Tongan that I found moving. I was held by the richness and passion of the sounds. These were spiritual moments for me. I look forward with anticipation to experiencing more of Chrarissa’s leadership for the Uniting Church.

While the Assembly celebrated its election of Charissa as a sign of the Uniting Church’s openness to unity in diversity, it was challenged by the earlier confronting lecture by Black liberation theologian Anthony Reddie, Director of the Oxford Centre for Religion and Culture. For him, unity and diversity were characteristics the Church has long asserted but rarely practised well. Do we find our identity and our sense of universality, of how we’re most alive, in “sameness” or “particularity”? The sub-groups we belong to reflect an answer.

After ‘peeling the onion’ of sameness and difference and the extreme outcomes of privilege and entitlement, servitude and racism, totalitarianism and balkanisation that can eventuate from them, Reddie reminded us that it is in Pentecost, with the birth of the Church, that sameness and difference are ultimately played out; the common experience of all Christians is their unity in Christ, their belonging all together in one unity. With that as the fundamental ground of our Church life and witness, how do we now navigate sameness and difference in the praxis?

As we consider our Presbytery, with its composition of sameness and difference, this is a question that challenges us all.