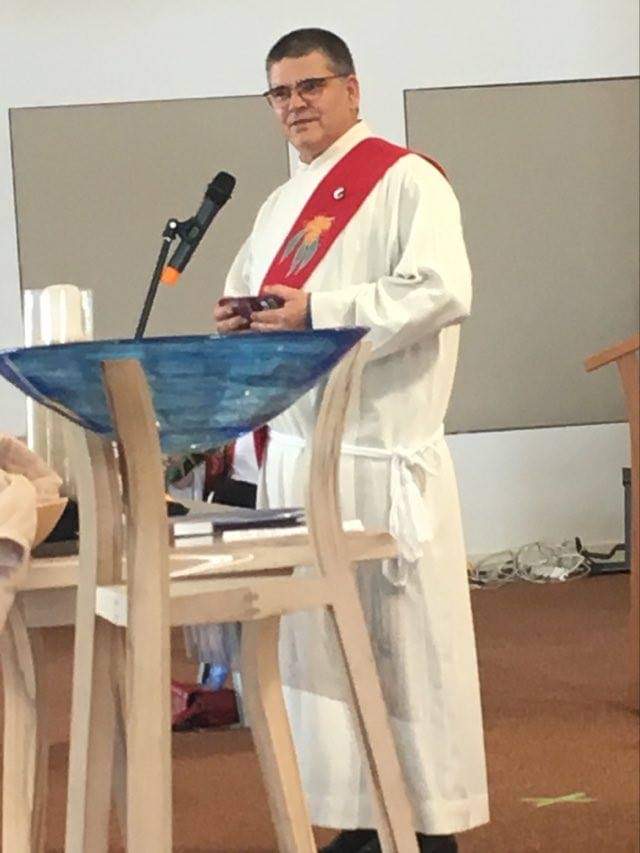 Congratulations to the Rev. Geoff Wellington, ordained as a Deacon in the Uniting Church, last Saturday afternoon, in the Gungahlin Uniting church building. Geoff is well-known across the Presbytery from his service in one of the Presbytery Minister roles from 2014 to 2019.

Canberra Region Presbytery Co-chairs Judy McKinlay and Ross Kingham led a joyful and uplifting service, which was conducted in accordance with COVID safety protocols. A limited number of people from the Presbytery joined with some of Geoff’s family to witness the event and share the experience in person. Songs were relayed from YouTube to the screens in the church. The whole service was broadcast live online via ZOOM.

The former Assembly President Gregor Henderson preached, reflecting on the Pressures and Privileges of ministry. Gregor is a member at Wesley Forrest, and has known Geoff and his family for many decades, since one of his early ministry positions. Colleague ministers from Canberra Region Presbytery, Sarah Agnew and Jangwon Seo, offered scripture in language and in drama, while Aimee Kent, Karyl Davison and Daniel Mossfield offered prayers.

A group of six people, lay and ordained, from the Presbytery stood around Geoff, hands extended towards him, as Co-Chair Ross placed his hand on Geoff’s shoulder and prayed the ordination prayer. COVID has a way of reshaping each and every element of worship, these days! 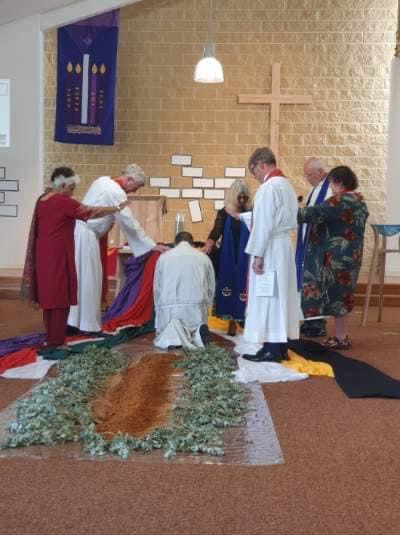 Following immediately after the ordination, Moderator Simon Hansford inducted Geoff and Tim Jensen to serve with Mark Faulkner on the Saltbush Team. This induction, along with the ordination, had been planned for earlier in the year, but was delayed by seven months because of the virus.

The Saltbush Team is a vital,part of Synod’s strategy for growth and renewal,across the church. Mark, Geoff and Tim have been working together since the beginning of the year, providing resources, online connections and now in person opportunities for people in rural and remote Congregations to gather, share, worship, learn, and be encouraged in mission. 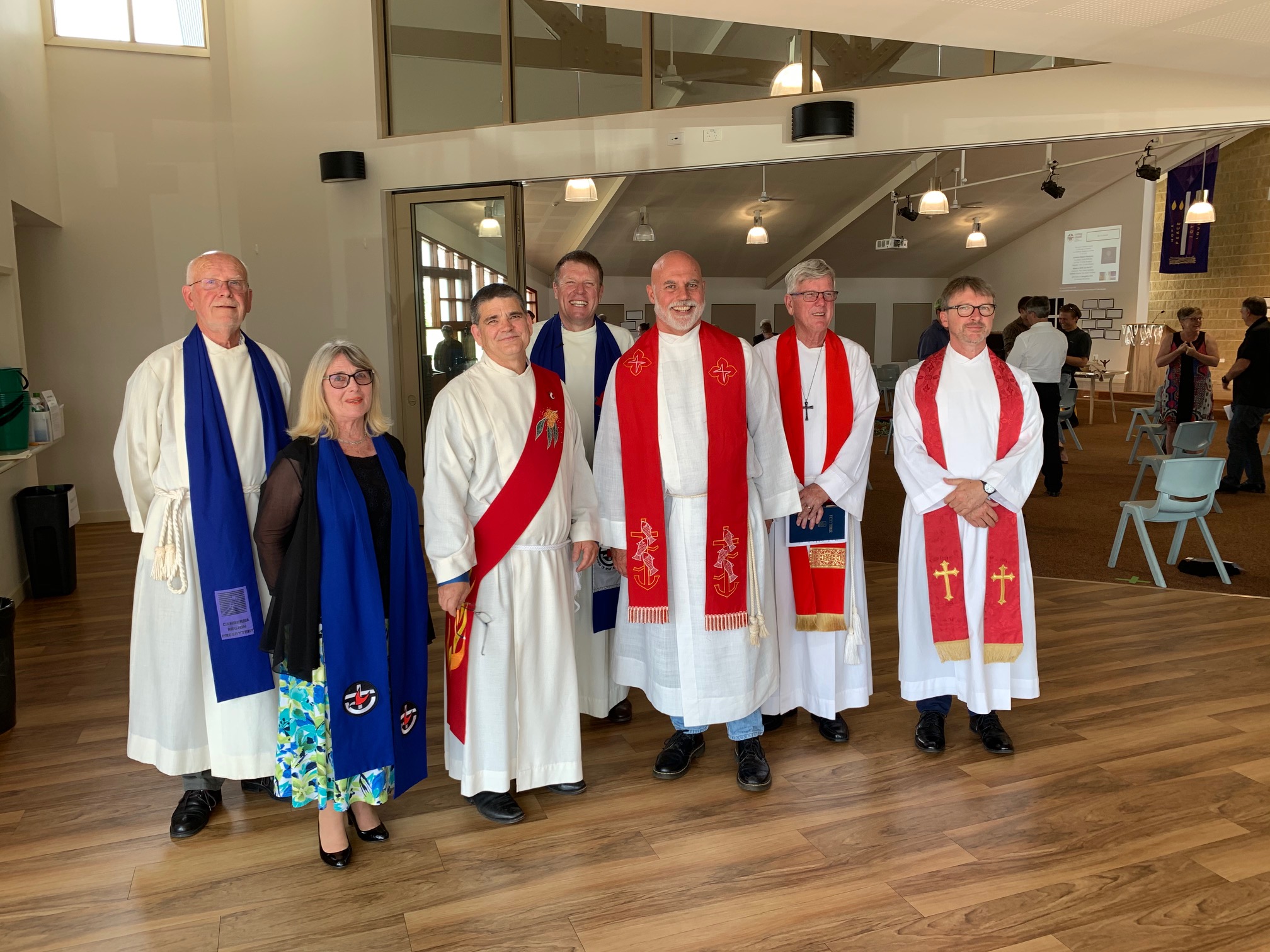 A wonderful visual display in the centre of the worship space included the red soil of Wiradjuri country, branches of Saltbush, and the feast of appropriate colours (red, yellow, black, white, green, and purple) overflowing from the central table.

Nigel Hawken, present in person from the Riverina Presbytery, our western neighbours, represented the widely-dispersed people of the Synod, leading a group of people who presented Tim and Geoff with symbols of ministry: a Bible, baptismal jug and water, and a communion plate and cup. Karyl Davison offered Geoff the diagonal symbols of bowl and towel, and presented him with the Deacons pin.

Tim spoke briefly, thanking colleagues and especially his family, as he has moved into this role. Geoff spoke with passion of his commitment to the mission of the church; his gratitude for the many women, in particular, who had equipped and strengthened him in his journey through various ministries and now into ordination; and his joy in sharing ministry roles with colleagues in the then Central West Presbytery, The Hunter Presbytery, as a SMRF Consultant for the Synod, in the Canberra Region Presbytery, and now with Saltbush.

Many thanks to Darren Wright, Lay Pastor to the Gungahlin Congregation, who offered his technological expertise to enable the service to be broadcast live via ZOOM to people, not only in the Canberra Region Presbytery, but also to people from Far North Coast, New England North West, Mid North Coast, Macquarie Darling, and Riverina Presbyteries, as well as others from the urban-based Presbyteries of our Synod. 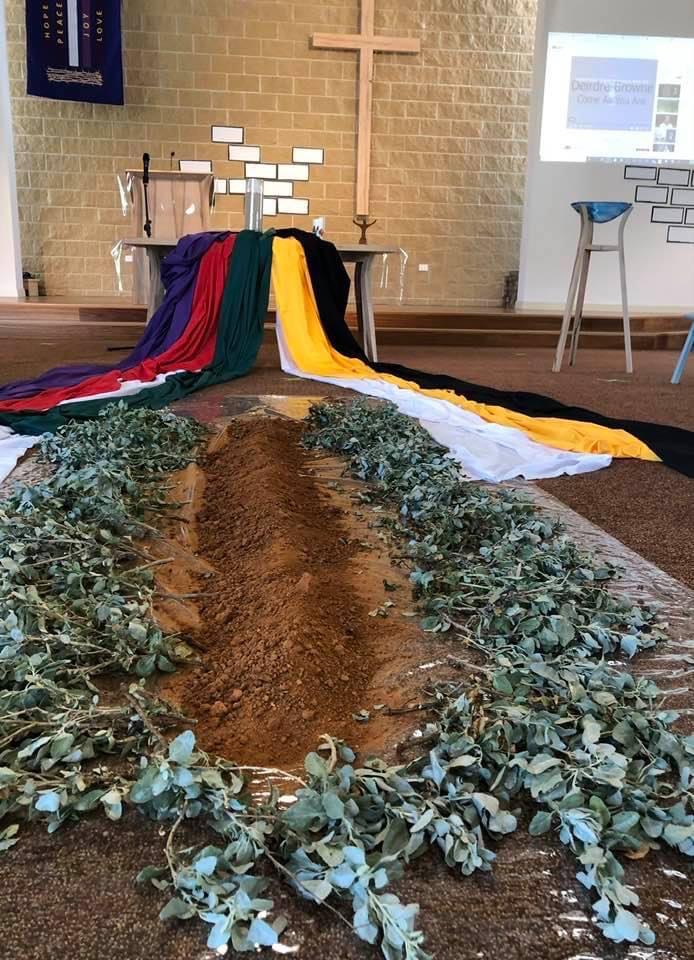