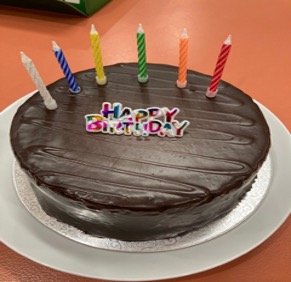 July 2015 saw the beginning of Rainbow Christian Alliance (RCA) as a joint program run in partnership between Tuggeranong Uniting Church (TUC) and Diversity A.C.T. community services. RCA was initiated to provide a Safe place for LGBTIQA+ people of faith, their families and friends who wanted to be able to get together in fellowship in an environment away from the judgement, hurt and pain often caused by Christian Churches and other faiths to the LGBTIQA+ community.

RCA gathers on the second Sunday of each month with a dinner church format, meeting. with LGBTIQA+ people of faith and their allies; gathering, chatting, eating, then sharing in a variety of worship styles including modified liturgy, readers theatre, discussion groups, guest speakers and the evening is usually wrapped up with dessert and much more chatting!

Initially the RCA project was set up utilising the space in the Erindale Neighbourhood Centre, next door to TUC but since the arrival of Covid and the requirements for modifications including increased space for those gathered, RCA has been meeting in the TUC auditorium.

Following the commencement of RCA in July 2015 an invitation was extended by Rev Aimee Kent and a partnership was also created with Goulburn Grace Community and Dare Café commenced in February 2016 meeting monthly and later incorporated a Bible study group. The Dare Café and Grace Community has been impacted by Covid19, but Pastor Amy Junor is now keen to work with the Dare Café group and keep things moving where possible.

Over its six years RCA has provided support to many people including Ministers or Pastors who lost their congregation or Church because of their own sexuality, people who faced exorcism, conversion therapies or even had lobotomies performed on them to cure their sexuality!

RCA also provided information to other congregations on LGBTIQA+ education and issues including at the very stressful time of the Marriage plebiscite. And Following the June 2016 Orlando shooting at Pulse night club, where 49 patrons were killed and 53 were wounded, RCA partnered with City Church to hold a Blue service for Orlando which was catered for with heart warming soups & fresh bread rolls by City Church congregation.

In more recent times RCA has had increasing support from TUC congregation members providing a core support group to assist with set up, catering and running of RCA, giving more space for the leadership team of Rev Miriam Parker-Lacey, James Ellis and Rev Elizabeth Raine to concentrate on working with the group activities.

RCA has provided a safe place for many and has had steady numbers of attendees of approximately 20-22 people at each gathering over the past 6 years. Obviously there has been changes as to who attends, but the numbers have remained steady and in recent months there has been an increase in LGBTIQA+ youthful attendees. These younger attendees may not face some of the issues older generation LGBTIQA+ people faced but there are still many ongoing issues for LGBTIA+ plus Christians.

Sadly, since losing the Marriage plebiscite there has now been an increased push from certain quarters to demonise Transgender or Non-binary people, and the Olympics has been used to push fears that Trans people are stealing women’s rights and your children! (The protect your children fears was also previously used to push the falsehood that homosexuality equalled paedophilia) 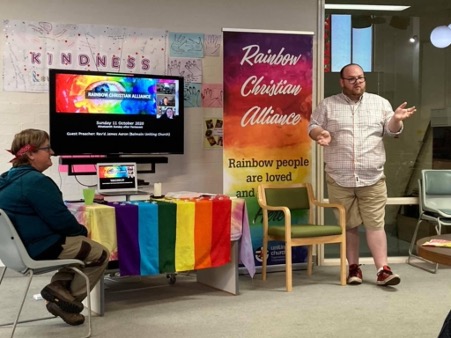 There are ongoing pushes for legislative changes introduced by Mark Latham in NSW to prevent even mentioning LGBTIQA+ issues in classrooms. LGBTIQA+ people are also faced with possible legislation to be tabled by the current Federal government on ‘Religious Freedom’. Initially the Prime Minister promised to look at legislation to keep LGBTIQA+ young people safe, but there is much cynicism as to what may be introduced and many LGBTIQA+ people fear exclusion or even loss of employment because of their sexuality or gender identity

This Sunday RCA will be meeting at Tuggeranong Uniting Church at 6pm. Rev Elizabeth Raine will be leading the discussions on the biblical ‘Clobber passages’ often used against LGBTIQA+ people.

More information on RCA can be found at https://tuc.org.au/worship/rainbow-christian-alliance/ or on Facebook https://www.facebook.com/groups/1025029234182558 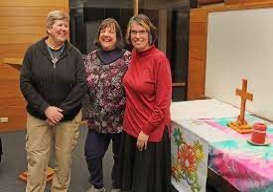 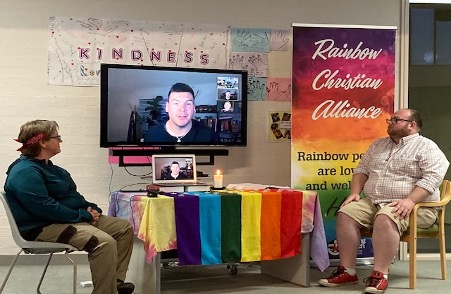